Creating characters is one of the most important parts of writing, but I don't think you can do it well unless you can really see the person.

And that's the whole picture - from hair to lips, midriff, hands, pants and shoes, even the way they walk.

Happily, I've developed a simple trick for making sure I have a comprehensive vision of one of my imaginary friends.

I always base their appearance on someone I know.

Now, I know the way we see people can vary wildly -

This caricature that was drawn for an article, for example; I'm not at all convinced it captures my classical good looks (hmmmm) etc..

Some of the most wonderful features of life we can easily stop noticing, and yet they're so important and helpful to writers.

If you're in the fortunate position of having a study in your home, and you've got the option, go for the attic or highest room. And even better, get yourself a skylight.

It may cost some money, but it'll pay you back a thousand times and more in the joyful currency of inspiration.

Why? Well, look at this, the view from my study this morning -

I've always thought the elements are a great inspiration for a scribbler.

I did a couple of events this week on the theme of success.

One was a prizegiving night at the wonderful South Molton Community College in Devon, the other a careers talk - 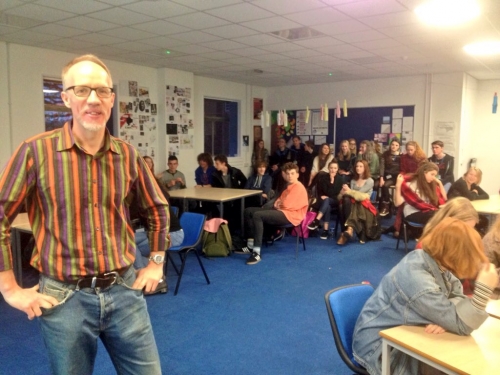 This was with some of the excellent students of Exeter College. And it all started me thinking about the meaning of success.

In a writing manner, I suppose I've been successful - as both journalist and author - which I suspect is why I was invited to the events.

(It's harder to market "Come listen to wannabe failure Simon Hall talking about some things he'd like to have done but never quite managed...")

Anyway, the important point was this -

This week, I was presented with a large and rocky hill of woe. Or, with a bit of authorly artistic licence, make that a mountain.

My new young adult book had been written, then re-written several times, as it goes. An editor had done her thing, amending and enhancing it. We both liked the end product very much. And so it was time for the verdict of the senior editor.

With some nervousness on my part, but mostly optimism, I came to our meeting. I was hoping, maybe even expecting, the thumbs up, the all clear on the runway to publication...

And instead got hit with a requirement for more edits.

An appropriate metaphor might be skiing happily down a beautiful, exhilarating slope, only to smash into a tree that suddenly materialised in your way.

Cue the standard Hall descent into despair, with much swearing, wailing and inner turmoil. I went for a run, had a beer, tried to talk myself out of my pit, all the usual tricks to lift the mood, but to little avail.

It's a fun new game for when you need a name for a character.

It's strange how hard finding names can be. I can agonise for days over what works and what doesn't.

Villains who don't sound evil enough, heroes who don't have quite the right ring of courage and strength.

Previously, when stuck, I would often go to the phone book and look through for a combination of Christian and surnames, to see if I could come up with a winner. But that's a little on the dull side.

And writing is fun, so I wanted to see if I could find a more creative and entertaining method.

A few minutes of thought, a couple of beers, and hey! An idea cometh.