The Gift of Time

The gift of time is a wonderful thing.

Now I'm no longer working a whenever to whenever job, I have more space to enjoy the world.

In my previous existence, endlessly rushing around, I doubt I would have noticed such a spectacle, let alone felt able to stand and enjoy it.

(Even if gazing up at the sky in the middle of a busy car park can get you plenty of funny looks.)

I also have more time to talk to people.

I set myself a series of challenges on coming to Cambridge, to try a few new things.

Lots have worked - buying a bike and exploring the city and its beautiful (if flat) surrounds, going to lectures on a range of subjects from Japanese nationalism to English Civil War art, touring the wonderful museums and galleries.

But one that hasn't come off is my attempt to embrace cafe culture.

I tried it and after half an hour, guess where I ended up?

Which set me wondering why I always prefer pubs. And I came up with a surprising answer.

The pubs I like are softer. There are curtains and carpets, cushions, flags, wall hangings.

I keep being asked, and it's a fair question, so -

No, it wasn't because there was anything wrong with Devon. Quite the reverse.

I love Devon. I miss the county and the people, some of whom will always have a very special place in my heart, and I will never let go of.

And yes, I had an amazing job, and it was a great place to be a writer, and I delighted in the teaching I did at the University, and College, and with schools.

There was nothing wrong with Devon. Far, far from it.

This Cambridge move is down to one of the mantras you've heard me wax on about plenty.

The fulfilling of the potential. The challenging yourself. The need to explore, innovate and learn. Whether it's in writing or whatever.

I don't know if it's a British thing, or maybe just human, but we do tend to underplay our achievements.

This week, I went back to the journalism job and interviewed a man whose sister was murdered twenty years ago, when he was just 15.

His courage and dignity were simply humbling.

When I asked how he had kept going, at the time, he said he was well looked after by his parents and friends, and always had been since.

What he didn't say was anything about his own incredible inner strength.

I did a double gym class this weekend, a weights session followed by an hour of CV.

Prepare yourself for a shock -

I've taken up cycling (don't laugh, I haven't fallen off too much), and it feels like I've been given a new pair of eyes.

Wow, the world looks different on two wheels. This is a snap I took last week of Cambridge from a few miles away. 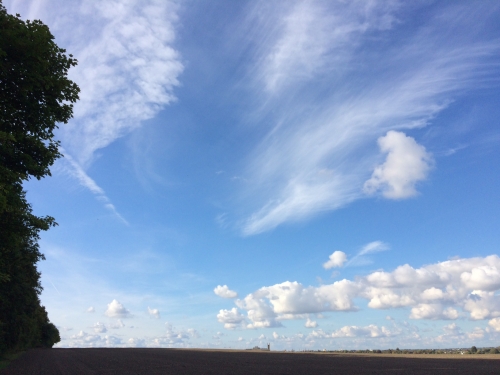 Ok, part of the reason I'm cycling is that the area, as you can see, is flat as a dish.

But here's the real delight.