Clear Eyes, Humility and The Plague

I went to an exhibition of pictures of the Third Flu Pandemic in Cambridge this week.

(Yes, I must have been in a cheery mood.)

But although it was disturbing, with its images of dreadful mass suffering, it was also very thought provoking. 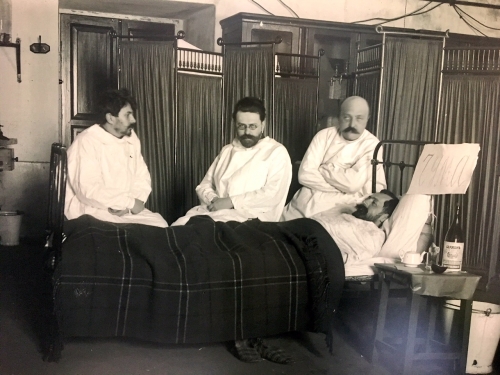 Something that stayed with me was overhearing another visitor saying to a friend, "Medicine was so primitive then."

And, as little things often do (with this strange brain, anyway), that led to a tumble of thoughts.

Part of the job of a writer is to see the world with clear eyes, drawing attention to things which are often unnoticed or unspoken.

We think our science and medicine are amazingly advanced now, but...

In a hundred years, won't people of then look back on us as primitive?

We haven't even managed to conquer the common cold yet, as my suffering this winter will tell you loud and clear.

And as for being so incredibly enlightened -

It's only ten years since the ban on smoking in public places was put in place.

Up until then, it was deemed fine to risk other people's health with personal vices.

And still today, we do our best to choke our wonderful planet to death with our pollution.

That's why I so value exhibitions like Visions of Plague - https://www.youtube.com/watch?v=LX8D_m8bM18 - if you care to see my video.

Apart from being fascinating and educational, they often bring a sense of humility.

And that can be very welcome in these sometimes self absorbed, and even more self congratulatory times.