I like a metaphor as much as a duck likes bread (see what I did there? Oh, I'm on form today. Watch out!)

The reason for such chirpiness? Trumpet fanfare on standby...

I've had an idea.

Now don't be unkind and say - is that it? Big deal. What's he on about now, etc?

Firstly, ideas are the most precious of commodities, for a writer and just about everyone else.

All creativity, innovation, exploration, discovery, understanding and so many other wonderful journeys start with the idea.

Secondly, I rather like this idea. Actually, that's very British understatement.

I want to take it out for a meal, a few drinks, go to a club with it, dance the night away together, and then...

Well, enough of that. Suffice to say I hope we'll be together a good, long time.

Because it's an idea for a new book, and I've hunting it for ages.

And just after it came, I was out taking a walk, and saw the most beautiful sign of spring. 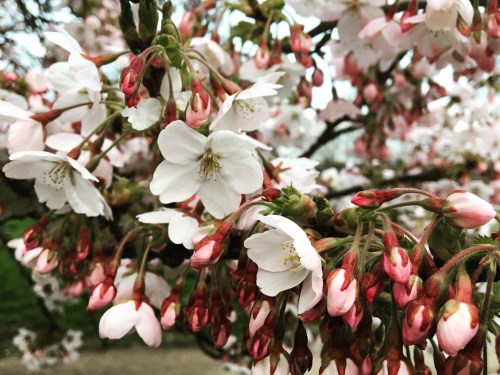 A metaphor, I thought. For my new idea.

The first thing I wanted to do with my idea was to start writing it. Get those lovely words cascading out onto the paper.

But that wouldn't be right, no matter how natural the instinct. Because I haven't explored the idea yet. Tested all its angles, its strengths and weaknesses, explored its true potential.

It might be a lovely idea, but it's raw. It needs refining, polishing, honing.

It needs that annoying, but vital factor, which I've talked about so many times before.

The input of work.

Which is where the metaphor of the ideas jail comes in.

It may feel cruel to lock up something so beautiful as a blossoming idea, even temporarily.

But it's very necessary.

To make sure that when it does grace the world, that wonderful moment when it can be set free, it fulfills its glorious potential.